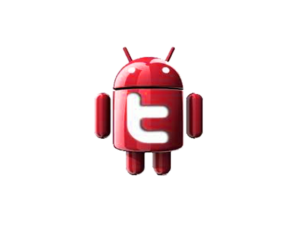 In this project the intention is to show how to use the Twitter block in a practical way.
Consists of receiving a signal from the ultrasound connected to the MIOIO-AppInventor Card and in case of exceeding a distance marked will send a Twitter alert to a specific user.

To get started the first thing to do is to get the user codes and secret code that Twitter provides for the use of external applications.
To do this we created an application on Twitter following the instructions below.

If you have achieved this you are on the right track.

Now let's see how the blocks are mounted with the MIOIO-App Inventor 2 so that the application warns us by Twitter when a distance is exceeded with the ultrasound.

The blocks in the part of the designer that we are going to need are:

We create the variables that we are going to use, including the ones that include the codes that we obtained from the application we created on Twitter.

We implemented the functions that we want the buttons to have.
Buttons 1 and 2 will serve to authenticate us on Twitter, and it will be that user who sends the message.
The button 3 will serve to activate the clock timer and thus start the application. 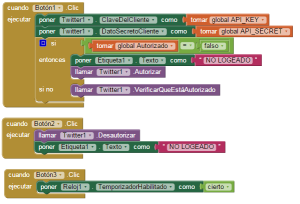 Once the user has been authenticated by Twitter, it will show us in (Label1). 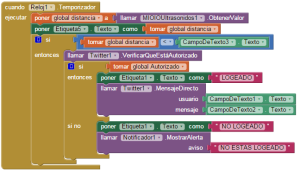 As we are going to use a sensor of the MIOIOBOT card we need a sample time, with which the data of the sensor will collect them in the timer of the Clock1. Now we will use this timer to perform the periodic operations we want, such as sending the message (FieldText2) to the user (FieldText1), to represent the state of our authorization in Twiiter (Label1) and to show the distance the sensor is picking up Ultrasound at each time interval (Label1). In addition, we compare the distance we have entered in (FieldText3) with the current distance of the sensor (global variable).